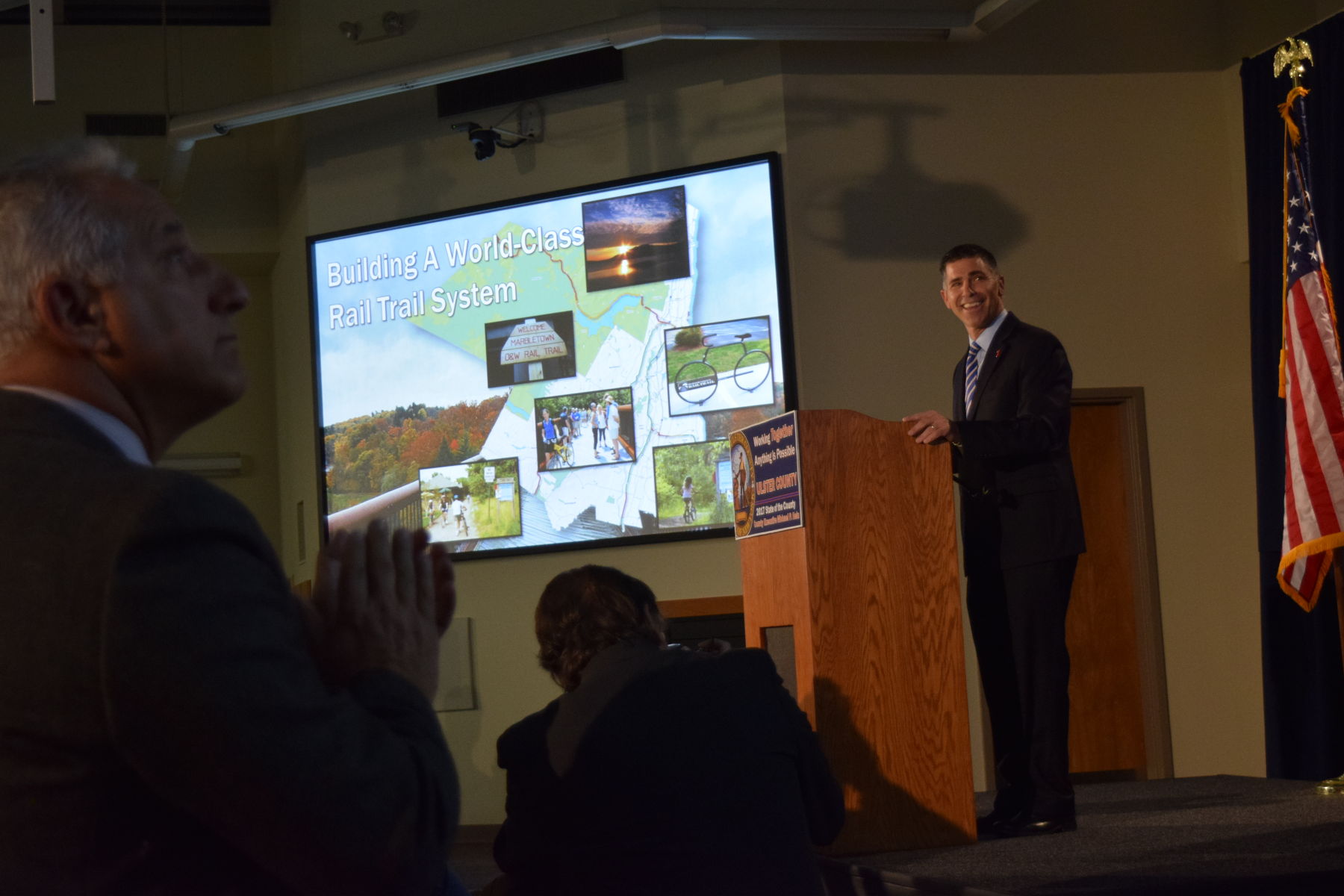 Working Together – Anything Is Possible In Ulster County

New Paltz, N.Y. – Ulster County Executive Mike Hein delivered his ninth annual State of the County Address at the conference center of Ulster BOCES in New Paltz to a large gathering of residents, business owners, and State and local officials.  The County Executive highlighted the many accomplishments of the previous year and detailed his vision for 2017.  His message of working “together” with the community to “build up and make better” resonated throughout his speech as he touched on the County’s achievements and the potential of an even brighter future with endless possibilities.

“As a reformer, I knew there had to be a better way, and so did the great people of Ulster County, and with their support we set about trying to rethink absolutely everything.  I believed that if we were bold enough we could actually create something special, a government that functions very different than the ones we’ve come to expect, and I am thrilled to say it’s working.  We’ve reinvented County government and the real winners are the people,” said County Executive Mike Hein.  “I am pleased to report that since 2009 our spending is down across the board by over $30 million, the departments of the executive branch are over 40% smaller, and the property tax levy for this year in Ulster County is actually less than it was all the way back in 2010.  We have provided millions to help our towns and the City of Kingston all while improving access to services for our citizens.  These kinds of historic accomplishments are hard fought and only possible when we all work together.”

County Executive Hein continued, “Last year, we had a number of exciting things happen, not the least of which was having Ulster County and some of our environmental initiatives featured in National Geographic Magazine.  It’s hard to imagine that 6.7 million readers in forty different languages got the opportunity to learn more about Ulster County.  That’s the kind of advertising you just can’t buy and it should provide a significant boost to our already booming $533 million dollar Tourism Industry.  In addition, the great people of Ulster County voted for, in a landslide, the common sense approach of moving family court from its current inadequate and expensive rental location to a County owned facility right next to the Department of Social Services where so many children actually receive critical services. Family Court is about real people and the complex issues that alter the course of their lives forever. When we all stand together, those among us `most in need´ can truly benefit from our collective humanity. I believe that here in Ulster County, by working together, we can show exactly what’s possible and as we look together over the horizon of our future, the opportunities for Ulster County are simply endless.”

KEY ACHIEVEMENTS AND NEW INITIATIVES HIGHLIGHTED BY THE COUNTY EXECUTIVE IN THE STATE OF THE COUNTY ADDRESS INCLUDE:

For 2017 State of the County Speech and Presentation please visit http://ulstercountyny.gov/executive/state-county