May 23, 2019 Presentation to Ulster County Regional Chamber of Commerce - Part One and Part Two (PPTX files - file split in two due to size) 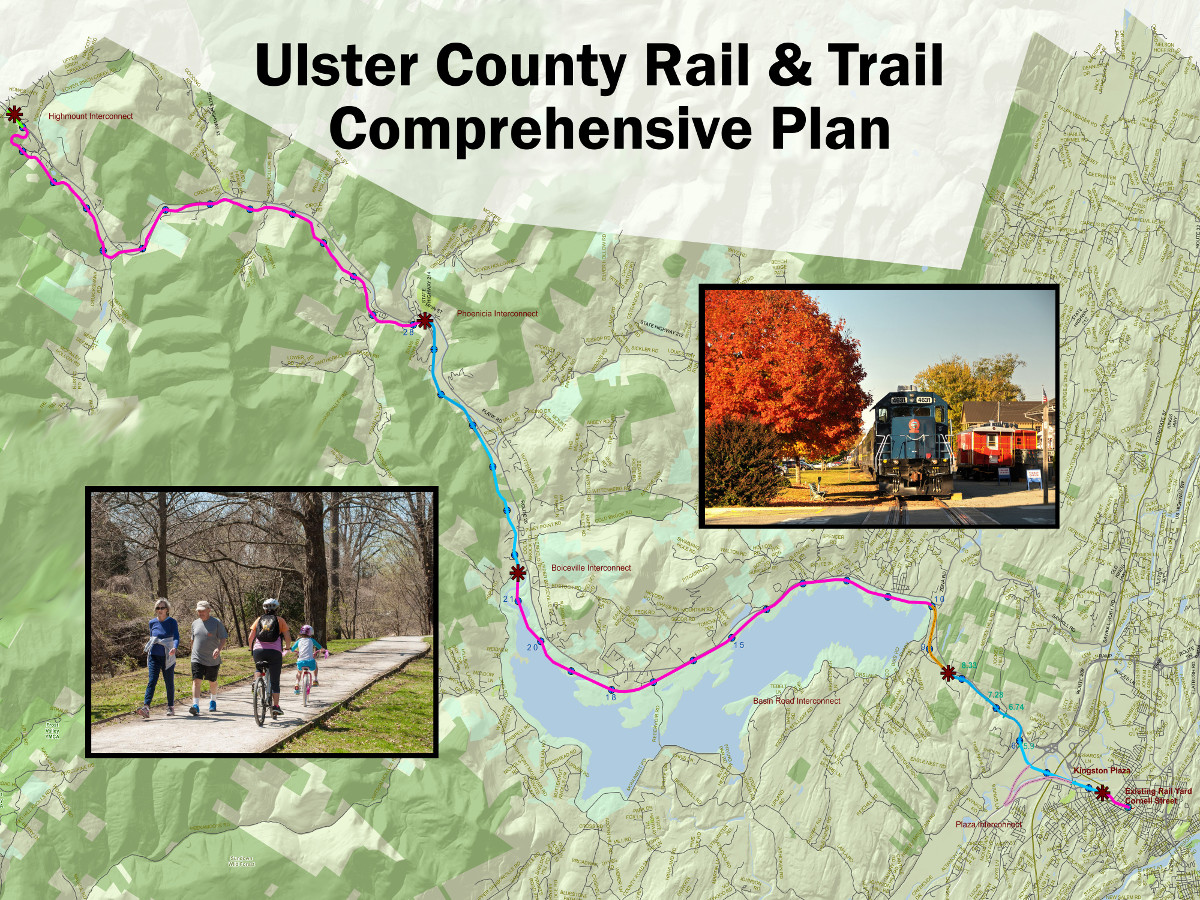 The Ulster & Delaware (“U&D") Corridor has been the subject of rigorous debate over the past several years as Ulster County worked to determine the future use of this publicly-owned 38.6-mile corridor following the May 31, 2016 expiration of the current Catskill Mountain Railroad operating lease.  The consideration of future uses included a comprehensive study and detailed assessment by the Ulster County Legislature in 2015, which hired an independent railroad consultant, Stone Consulting, to research and develop a “Highest and Best Use Recommendations” report at the end of study.

After many months of research, site visits, stakeholder meetings, document reviews, and economic benefits analysis by Stone Consultant and the special bipartisan Legislative committee, the full Legislature unanimously adopted (23-0) Resolution No. 488 on December 15, 2015, which was signed by the County Executive the following week. Resolution No. 488 created a “segmented rail and trail” compromise policy that ensures tourism railroad operations can continue in the City of Kingston and in Mount Tremper/ Phoenicia while also allowing previously unused segments of the U&D to be converted into a public recreational trail for walking, running, cycling, cross-country skiing and other outdoor activities.

Over the past months, Ulster County has worked to implement the Legislature’s compromise policy, issuing Requests for Proposals (“RFP”) for engineering design of an 11.5-mile segment of future trail along the Ashokan Reservoir and for a 0.8-mile linear park in Kingston from Cornell Street to Kingston Plaza.  The County also issued an RFP for a tourism railroad operator for the Kingston and/or Phoenicia track segments, which is due on May 20, 2016.

The County’s segmented rail and trail policy, when fully implemented, will ensure that tourism railroad operations will continue-- and be extended by several miles-- in the two areas railroad currently operates.  In addition, the future trail segments will open the corridor for recreational use by the public, including the northern shore of the Ashokan Reservoir, which has been restricted to public use (only by special NYC DEP permit) for more than 100 years.  These segments are a critical component to the County’s plan to have a world-class interconnected rail trail system running from the Ashokan Reservoir to the Walkway Over the Hudson.

In December of 2015, the Ulster County Legislature voted unanimously to adopt a comprehensive plan that allows for tourist train operations to remain in the City of Kingston and Phoenicia areas. This plan also supports the County’s efforts to create a world class rail trail system from the Ashokan Reservoir to the Walkway Over the Hudson. This provides for the best of both worlds with respect to rail and trail initiatives.

Q: Will tourist trains be able to run in the City of Kingston in the future?

A: Yes. The County plan allows for train operations between the Kingston Plaza and Route 28A in the Town of Hurley. This 4.5 mile segment is two miles longer than last year’s “Polar Express” run, allowing for additional track to potentially extend this and other popular theme train rides.

Q: Is the County suing the Catskill Mountain Railroad (CMRR)?

A: No. The County never sued CMRR. The County issued a Notice of Default to CMRR in 2013 for not fulfilling requirements of its lease. CMRR responded by suing the County. A settlement was ultimately reached in April 2016 which included CMRR’s support of the County’s comprehensive plan. It also required CMRR to address many of the issues highlighted in the Notice of Default. CMRR, along with other tourist rail operators, is encouraged to apply for future operations.

Q:     Why can’t we build “rail with trail” the entire length from Kingston to Highmount?

A: Building rail alongside trail the entire length of the U&D Corridor is not feasible. In fact, it has proven impossible to re-establish rail operations alone over the entire 38-mile Corridor due to decades of severe deterioration and damage. Additionally, the U&D Corridor is narrow and was constructed in some areas just wide enough for a single train to pass. This Corridor is often bordered by wetlands, steep slopes, rock cuts, and even buildings on adjacent properties. Constructing a multi-use trail that is accessible (compliant with ADA standards) would require widening of the existing Corridor, which was determined to be virtually impossible due to topography, environmental concerns, significant costs, impacts to adjacent properties and permitting issues. It is important to note there are multiple segments identified by the County Legislature where rail with trail could exist and those areas are included in the comprehensive plan.

Q:   Why did the CMRR have to leave the Cornell Street rail yard in Kingston?

A: The Cornell Street rail yard was not part of CMRR’s lease. Also, as part of the settlement agreement CMRR has moved its trains and other equipment in order to allow for the evaluation and cleanup of potentially hazardous environmental conditions. The County has also begun the design of a linear park from the former rail yard to Kingston Plaza, which will provide a safe pedestrian trail link between Midtown neighborhoods and stores and services, including a major supermarket.  It will also provide much-needed recreational park space to adjacent neighborhoods now lacking convenient access to open spaces and parks.

Q: How will Ulster County pay for rail trail construction?

A: Over the past few years, Ulster County has secured over $9.1 million in grant funding to assist in the construction of rail trail projects throughout the County. On the U&D Corridor, NYC Department of Environmental Protection will provide $2.5 million and has also agreed to construct three trailheads at its expense including facilities and parking at the Ashokan Reservoir. The County has also secured $2.6 million from New York State toward additional construction on the U&D Corridor.